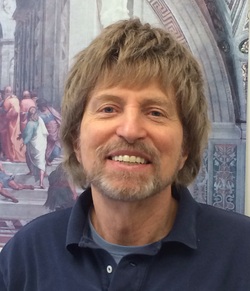 Some of my interests

One of my main research interests is the theory of nuclear forces. These are the forces that hold the atomic nucleus together. Obviously, they are crucial to all of nuclear physics. Over the past three-quarter century, our perception of these forces have undergone dramatic changes. In the early stage, initiated by Yukawa in 1935, the nuclear force was perceived as fundamental, mediated by the exchange of mesons. With the development of Quantum Chromodynamics (QCD) in the early 1970s, the fundamental character of this picture was called in question. According to QCD, the fundamental Strong Force acts between quarks and gluons. The force between nucleons is then just a residual force similarly to the Van-der-Waals force between neutral atoms. In terms of quarks and gluons, the nuclear force is a complicated problem, which is made even more difficult by  the nonperturbative nature of QCD at low (nuclear physics) energies. In seminal papers published in 1979 and 1990, Steven Weinberg has shown the way out of this dilemma: Construct an effective field theory (effective Lagrangian) for the interaction between pions and nucleons that realizes the symmetries of low-energy QCD, particularly, (broken) chiral symmetry. Today, we believe that this approach, also known as chiral perturbation theory (ChPT), provides us with the best way to understand nuclear forces on fundamental grounds. Using this framework, a lot of progress has been made during the past 15 years. Quantitative two- and multi-nucleon potentials have been derived and applied in microscopic nuclear structure calculations with a great deal of success. I have performed research at both stages of the history of nuclear forces: the meson theory stage and, in recent years, in the framework of chiral effective field theory. For more details, see the review article: R. Machleidt and D.R. Entem, Chiral Effective Field Theory and Nuclear Forces, Physics Reports 503, 1 (2011). See also LECTURES ON NUCLEAR FORCES.

Nuclear physics has many useful applications. Unfortunately, the more controversial ones, like nuclear weapons and nuclear reactors, are the best and sometimes only known ones. However, there are hundreds of nuclear physics applications that have been a blessing to mankind. In particular, applications of nuclear physics in medicine save and improve thousands of lives every day. The treatment of cancer by proton and heavy-ion beam radiation is one of the great success stories that, regrettably, your family doctor and even your "specialist"(?) probably never heard of. For more details, see talk titled Nuclear Physics - a Blessing to Mankind. 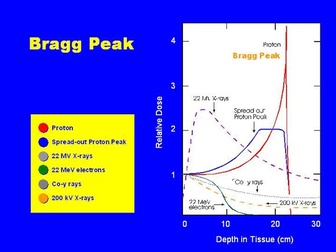 Hope and blessing for every cancer patient with localized tumor.

The dream of a theory of everything through history 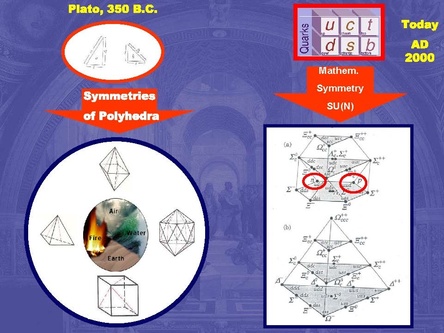 One of the most fundamental goals of modern physics is grand unification. The great effort in theoretical physics of the past half century may suggest that the idea of a Theory of Everything (TOE) is a typical child of modern days. This is not true. Almost as long as humans have done science, they have tried to find general principals underlying all nature. Ancient Greek philosophers have played an outstanding role. In particular, there are amazing parallels between the ideas of Plato and the theories of modern particle physics. This fact has been pointed out repeatedly by Werner Heisenberg, who had a classical education. For more details, see talk titled The Never-Ending Dream of Mankind: The Theory of Everything.

Plato's "theory of elementary particles" versus the modern one. 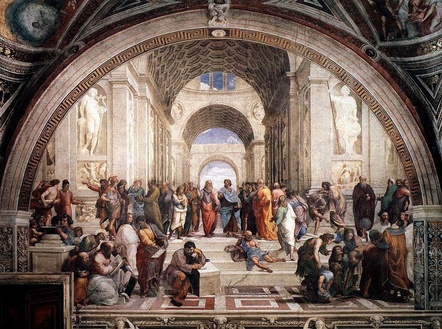 The great brains of the antiquity:
The School of Athens (Raphael, 1510),
fresco, Stanza della Segnatura, Vatican.

Evolution of the universe according to the theories of modern physics.


Science and religion, if understood right, are not at odds. Unfortunately, there is a growing trend in our society to construct a controversy between science and religion. Intelligent Design has been the latest creation of the religious creationist movement. The concept of ID was put on trial in federal court in Fall 2005 in Pennsylvania. Judge Jones allowed for thorough testimony from all sides. In my talk titled Teaching Intelligent Design: The Scientific, Theological, and Legal Controversy  I review the legal history of court cases of this kind and summarize the main arguments advanced at the Dover School Board trial. 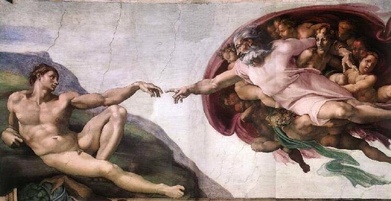 The Link Science-Religion
The proper link between science and religion was provided already some 1900 years ago in the gospel of John 1:1

Unfortunately, persistently poor translations of this original Greek text (like, "In the beginning was the Word ... " ???) have prevented the correct understanding of this beautiful statement for almost two millennia. In modern scientific language, an appropriate translation/interpretation reads: